When you dream about being a strong woman what should you dream? ... Women, young girls, dream of being so confident in God, and who you are in God as the daughter of the king of the universe, and what he has done for you and promises to do for you and be for you in Jesus Christ, that you fear nothing but God and laugh at the time to come - no matter what it holds. (John Piper, Christian Men and Women are Strengthened by the Gospel 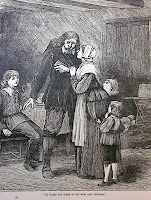 I'm declaring this to be women's week in our Pilgrim's Progress series. Today I'll share three stories of women in John Bunyan's life, on Wednesday I'll tell you the inspiring story of Elizabeth Bunyan, and on Friday we'll chat about Christiana and Mercy from Pilgrim's Progress Part II . Let's begin with three stories from John Bunyan's autobiography, Grace Abounding:

We never find out the name of Bunyan's first wife. Perhaps her name was Mary, since oldest daughters were commonly called after their mothers. She married Bunyan when they were young, and they shared the great grief of discovering their first child, Mary, was born blind. They had three more children, Elizabeth, Thomas, and Joseph. Here's John's story of this godly woman' impact on her godless husband: 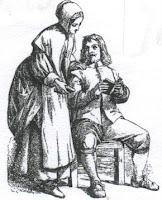 This woman and I, though we came together as poor as poor might be, not having so much household stuff as a dish or spoon between us both, yet this she had for her part, "The Plain Man's Pathway to Heaven" and "The Practice of Piety," which her father had left her when he died. In these two books I would sometimes read with her ... She also would be often telling me what a godly man her father was, ... and what a strict and holy life he lived in his days, both in words and deeds. ... Wherefore these books, with this relation, though they did not reach my heart, to awaken it about my sad and sinful state, yet they did beget within me some desires to religion.

The poor women of Bedford

John Bunyan was now outwardly religious, but knew nothing of the true power and joy of God's grace in Christ. Once again, God used godly women to bring John face to face with his own wretchedness, and eventually to the foot of the cross. 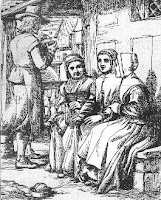 But upon a day the good providence of God called me to Bedford to work at my calling, and ... there were three or four poor women sitting at a door in the sun talking about the things of God. ... I drew near to hear what they said, for I was now a brisk talker of ... religion ... Their talk was about a new birth, the work of God in their hearts, as also how they were convinced of their miserable state by nature; they talked how God had visited their souls with his love in the Lord Jesus ... And methought they spoke as if joy did make them speak; they spoke with such pleasantness of scripture language, and with such appearance of grace in all they said, that they were to me as if they had found a new world.

If you're in England, and you have the chance to visit Bedford, go to the John Bunyan museum. Here you'll see the little stoneware jug which is said to have been used by John Bunyan's blind daughter Mary to bring him soup every day while he was in prison until she died at the age of 13. Here's how John spoke of his anguish at leaving his young family, and his terrible fear of being executed and leaving his family and his best-loved blind daughter destitute:

The parting with my wife and poor children, hath often been to me in this place, as the pulling the flesh from the bones, ... because I ... brought to my mind the many hardships, miseries, and wants that my poor family was like to meet with, should I be taken from them, especially my poor blind child, who lay nearer my heart than all besides: Oh! the thoughts of the hardship I thought my poor blind one might go under, would break my heart to pieces. ... Thou must be beaten, must beg, suffer hunger, cold, nakedness, and a thousand calamities, though I cannot now endure the wind should blow upon thee. But yet ... I must venture you all with God, though it goeth to the quick to leave you: Oh! ... I was as a man who was pulling down his house upon the head of his wife and children; yet, thought I, I must do it, I must do it!

It's easy to put yourself in the shoes of these women, isn't it? The young woman who shared her faith with her husband: she gives those of us married to non-Christians hope. The poor women who sat chatting in the sun in Bedford, whose joy in Christ pierced Bunyan's self-satisfaction: they encourage us that speaking openly about God's love can win people's hearts. Ten year old blind Mary, who lost the presence of her dear daddy at home because he was compelled by Christ's love to preach the gospel: she reminds us to pray for Christians who risk the safety of their families for Christ every day.

I'm saving the best till last. On Wednesday, God willing, I'll tell you the story of Elizabeth Bunyan: a women of such courage and purpose that she's become one of my heroines of the faith.
Posted by Jean at 07:00