How I love the women in my church who stand when everything around their soul gives way! Oh, how the grace and the glory of God shines off of their lives! I've been there 28 years. I've walked through a lot of dark valleys with them, and I've buried a lot of children. [God's purpose for men and women] doesn't lead to wimpy womanhood, but it does lead to ... true womanhood. (John Piper, The ultimate meaning of true womanhood)

Elizabeth was only 19 when she married 31 year old John, a year after his first wife died. She became step-mother to four children, the oldest one blind. She was pregnant one year after their marriage, but the shock of John's arrest drove her into premature labour, and her baby died. Grieving, inexperienced, and lonely, she was left to raise John's four children during the twelve years he was in prison.

When I heard her story, I couldn't help wondering how she felt. Left to bring up the young family of a man she had recently married, weak and in pain after 8 days labour, her baby lost and her husband in prison because he was unwilling to stop preaching the gospel - was she tempted to bitterness, complaining or resentment? Did whispered thoughts go through her head - "He was only asked to stop preaching, not to deny his faith ... he doesn't really love me ... God has abandoned me ... "?

Instead, she stood bravely before a hostile courtroom, pleaded for her husband's freedom, and defended his right to preach the gospel. I'll tell you the story in her own words, as she told it to John, for every word shines with a fierce intelligence, courage and grace:

The place where she went ... was to the Swan-chamber, where the two judges, and many justices and gentry of the country, was in company together. She then coming into the chamber with a bashful face, and a trembling heart, began her errand to them in this manner:-

"My lord" (directing herself to judge Hale), "I make bold to come once again to your Lordship, to know what may be done with my husband."

Judge Hale said, "Woman, I told thee before I could do thee no good" ...

Then one of the justices that stood by, whom she knew not, said, "My Lord, he was lawfully convicted."

"It is false," said she; "for when they said to him, 'Do you confess the indictment?' he said only this, that he had been at several meetings, both where there were preaching the Word, and prayer, and that they had God's presence among them."

Whereat Judge Twisdon answered very angrily, saying, "What, you think we can do what we list; your husband is a breaker of the peace, and is convicted by the law" ...

"But," said she, "my lord, he was not lawfully convicted."

Then Justice Chester said, "My lord, he was lawfully convicted ... he is a pestilent fellow, there is not such a fellow in the country again."

Judge Twisdon said, "What, will your husband leave preaching? If he will do so, then send for him."

"My lord," said she, "he dares not leave preaching as long as he can speak."

Twisdon said, "See here, what should we talk any more about such a fellow? Must he do what he lists? He is a breaker of the peace."

She told him again, that he desired to live peaceably, and to follow his calling, that his family might be maintained; and moreover, said, "My Lord, I have four small children, that cannot help themselves, one of which is blind, and have nothing to live upon, but the charity of good people." 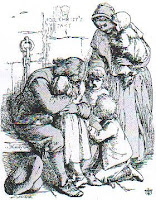 "My lord," said she, "I am but mother-in-law to them, having not been married to him yet full two years. Indeed, I was with child when my husband was first apprehended; but being young, and unaccustomed to such things," said she, "I being dismayed at the news, fell into labour, and so continued for eight days, and then was delivered, but my child died."

But Judge Twisdon told her, that she made poverty her cloak; and said, moreover, that he understood I was maintained better by running up and down a preaching, than by following my calling.

"What is his calling?" said Judge Hale.

Then some of the company that stood by, said, "A tinker, my lord."

"Yes," said she; "and because he is a tinker, and a poor man, therefore he is despised, and cannot have justice. ... He preacheth nothing but the Word of God", said she.

"He preach the Word of God!" said Twisdon; and withal, she thought he would have struck her; "he runneth up and down, and doth harm." 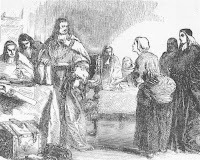 "God!" said he, "his doctrine is the doctrine of the devil."

"My lord," said she, "when the righteous Judge shall appear, it will be known that his doctrine is not the doctrine of the devil."

[Elizabeth recalls] ... though I was somewhat timorous at my first entrance into the chamber, yet before I went out, I could not but break forth into tears, not so much because they were so hard-hearted against me, and my husband, but to think what a sad account such poor creatures will have to give at the coming of the Lord.

Now there is a woman strong in God and the gospel! If the day comes when my husband is forbidden to preach the gospel, and the safety and happiness of our family are compromised, I pray that I will stand at his side as Elizabeth did, compelled by the love of Christ. For who can refuse to preach such a great salvation (2 Cor. 5:14; Heb. 2:3)? May you and I be strong women of God, standing firm in his grace, confident in his sovereignty, trusting in his love, even when everything else gives way.

I haven't found any biographies of Elizabeth Bunyan, but Powerful Defender part 1, part 2, part 3 & part 4 is a beautiful retelling of her story for children .

THanks Jean. This is an amazing story!

Is there a good biography about her you can recommend?

Hi Nic! No, there's not, actually, not even on line. Although here's a re-telling of her life for children which I found on a blog and meant to attach to the end of the post (thanks for reminding me!) Powerful Defender.

Thanks for the link! I did not find a biography of her either... The most information was in the writings of John Bunyan himself - sometimes needing translation from his archaic English, but very telling in its own way.