Pilgrim's Progress: how to become a giant slayer 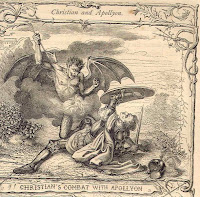 In this combat no man can imagine, unless he had seen and heard, as I did, what yelling and hideous roaring Apollyon made all the time of the fight; he spake like a dragon: and on the other side, what sighs and groans burst from Christian’s heart.

There are many battles I fight daily. I battle sinful desires: gossip and bitterness, gluttony and covetousness, anger and complaining, laziness and self-absorption, anxiety and discouragement. I battle the world: magazines which produce dissatisfaction, advertising which tempts to over-spending, TV shows which promote life free from restrictive morals. I battle Satan: his whispered thoughts of temptation, worry, doubt and despair. Sometimes I win a decisive battle, only to have to take up my weapons again.

Here's four battles in Pilgrim's Progress which arm us for the fight:

I never saw him all the while give so much as one pleasant look, till he perceived he had wounded Apollyon with his two-edged sword; then, indeed, he did smile, and look upward! But it was the dreadfullest sight that ever I saw.

The most terrible foe in Pilgrim's Progress is monstrous Apollyon. Our Enemy attacks us with lies, temptations and accusations (Jn. 8:44; Jam. 4:7; Rev. 12:10). Like Christian, may we stand our ground, remembering we're defended by God's armour. When Satan hurls the "fiery darts" of his accusations, may we defend ourselves with the "shield of faith", trust in the grace of Christ. Wounded and weary after years of battling the same temptations, may we battle on, knowing God helps us overcome through his conquering Son. May we take our sword, the Bible, and fling God's promises in the Enemy's face, confident he will flee from us. (Eph. 6:10-20). May we thank God for the victory, knowing that we fight only in his strength.

The Fiends of Hell

And ever and anon the flame and smoke would come out in such abundance, with sparks and hideous noises, (things that cared not for Christian’s sword, as did Apollyon before,) that he was forced to put up his sword, and betake himself to another weapon, called All-prayer.

One of the most dreadful places Christian comes to is the Valley of the Shadow of Death, where gibbering fiends rise from the Mouth of Hell. His sword ineffective, he takes up another weapon, All-Prayer (Eph. 6:18). Sometimes, when depression or anxiety are persistent and powerful, it's hard to preach God's word to yourself, and it doesn't banish the dark emotions. At other times, doubting, despairing, impure thoughts come from without rather than within, like the blasphemous thoughts which assailed Christian and Bunyan during his conversion, and it's best to neither entertain nor resist them, just to let them go. At such times, all we can do is pray and wait for the light to dawn. We may need others to speak the words we can no longer speak to ourselves, as Faithful did for Christian in the Valley. Our emotions may not change, but like Christian, we can resolve to go forward in "the strength of the Lord God", until the day God brings light once more.

What a fool, quoth he, am I, thus to lie in a stinking dungeon, when I may as well walk at liberty! I have a key in my bosom, called Promise, that will, I am persuaded, open any lock in Doubting Castle. Then said Hopeful, That is good news; good brother, pluck it out of thy bosom, and try.

What a dreadful place Doubting Castle is! A stinking dungeon, where Christian and Hopeful lie for days, without food, water or light, beaten, goaded to kill themselves, terrified of death. Bunyan is describing his doubt and despair during his conversion and imprisonment. Four things help them escape: Faithful's encouragement which keeps Christan from suicide, prayer, the "key of Promise", and the sunshine which weakens Giant Despair. The "key" is in Christian's "chest-pocket": he has memorised God's word and hidden it in his heart (Ps. 119:11). "Sunshiny weather" may refer to God bringing light, or the way discouragement is lessened by the natural helps of this world. Encouragement, prayer, Bible memorisation, God's good world: these are powerful weapons against despair. 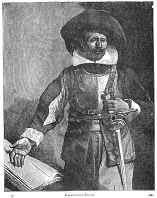 I fought till my sword did cleave to my hand; and then they were joined together as if a sword grew out of my arm; and when the blood ran through my fingers, then I fought with most courage.

Valiant-for-Truth is one of the greatest of God's champions. Hopelessly outnumbered, he prays for God's help and fights on, confident that a man can overcome an army with truth on his side. He defeats his enemies with his "Jerusalem blade", which can "cut flesh and bones, and soul, and spirit" (Heb. 4:12). He fights so long and so well that his sword becomes part of his hand, and the blood runs through his fingers: the battle with sin is a costly one (Heb. 12:4). How wonderful to be so experienced in the battle that the sword of God's word becomes one with our hand!

May we, like these great warriors of the faith, use well the weapons God has given us:

With such great weapons at our disposal, let's not give up in the day of battle! Let’s wake each morning, put on our armour, polish our shield, sharpen our sword, and hide the key of promise in our pocket. Let's get ready for the fight, and battle on through the long days and nights, confident that we can overcome through him who gives us strength.

If you'd like to reflect further on the battle against sin, the world, and Satan, I encourage you to listen to this wonderful sermon by Don Carson on Ephesians 6, The Christian in Complete Armour, which I've told you about here. Here's some posts I've written on the battle for joy and against anxiety and depression, and the battle for self-control.

Questions for reflection:
Do you think of your Christian life as a battle? How has Pilgrim's Progress encouraged you in your battle against sin, the world and Satan? What are you battling at the moment? Read through the list of weapons and pieces of armour. Which do you need to learn to use more effectively? What practical changes can you make so this will happen? Pray for God's help and strength in your battles.
Posted by Jean at 07:00

Thanks Jean... I'm enjoying these posts... and the book! I think the idea of being a warrior isn't always on my mind. I am trying to think more about life this way. It has really inspired me and given me a more concrete view of things. Especially with encouraging others and how important it is to memorise scripture so we can fight with the word of God!
Keep it coming! :-)
Sarah.

Thanks, Sarz, I'm glad you're enjoying and learning from Pilgrim's Progress. Fight on!