The opening scenes of Pilgrim's Progress: conversion and assurance

So I saw in my dream that the man began to run. Now he had not run far from his own door when his wife and children, perceiving it, began to cry after him to return; but the man put his fingers in his ears, and ran on crying, Life! life! eternal life! So he looked not behind him, but fled towards the middle of the plain.

If you're anything like me, the opening scenes of Pilgrim’s Progress left you with lots of questions. When exactly does Christian become, well, Christian? What’s the parchment roll he has to carry to gain entry into heaven? The Slough of Despond sounds like something from Harry Potter, but what’s it all about?

We're confused because we often think of conversion as a simple process, a human decision made in response to an alter call or a Two Ways to Live gospel presentation: “You can be 100% sure of going to heaven! Just pray this prayer!” But for the Puritans, conversion was more like a natural birth than an induction, and the pastor the mid-wife overseeing God's sovereign work in the heart. Conversion was generally a slow process, following certain stages, and it was often necessary to humbly wait on God for his gift of assurance.

Here’s the main stages of conversion according to the Puritans, as shown in the experience of Christian, his travelling companion Hopeful, who tells the story of his conversion later in the book, and Bunyan himself (if you're not interested in the details, feel free to skim-read: I'll talk about what I think we can learn at the end).

1. The Burden: Conviction of Sin.

Pilgrim's Progress opens with an unforgettable picture of conviction of sin: a man in rags (sin - Isa. 64:6), bent under a huge burden (guilt - Ps. 38:4), reading a book (the Bible), trembling and weeping because of the fire from heaven which threatens his town. In Pilgrim's Progress Part II, Great-Heart says, "I care not at all for that profession [of faith] which begins not in heaviness of mind".

2. The Evangelist: Directed to Christ. 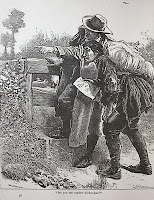 Evangelist is a great and solemn man, stern but kind, a Puritan pastor like John Gifford, who counselled John Bunyan through his conversion. He directs Christian to the Gate (Christ - Jn. 10:9), and when he can’t see the Gate, to the Light (the Bible - Ps. 119:105; 2 Pet. 1:19). Bunyan read the Old Testament for many months before he understood the gospel.

3. The Slough of Despond: Despair.

The Slough is filled with "fears, and doubts", “the scum and filth that attends conviction of sin”: not a necessary stage of conversion, but a common one. God provides the stepping-stones of his Promises, but many fail to see them. Bunyan blamed his long years of despair partly on his inability to simply believe God's promises to save all who come to Christ. 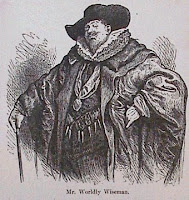 Hopeful, like Bunyan, "fled from, not only my sins, but sinful company too ... I betook me to religious duties, as praying, reading, weeping for sin." Christian follows the advice of Worldly Wiseman to lose his burden by obeying the law, and finds himself trembling at the foot of Mount Sinai, threatened by the judgement which comes on all who seek to be right with God through good works.

Did you find it hard to tell when Christian is converted? I did! Many readers assume it’s when he comes to the Cross. But it’s probably at the Wicket-Gate (a narrow gate or door - Jesus, the gate for the sheep, Jn. 10:9) for it’s here that Christian enters the straight and narrow way (Matt. 7:14), Christiana is pardoned by Good-Will (Jesus), and false pilgrims like Formalist and Hypocrisy fail to start their journey.

Interpreter may represent the Spirit, or the early instruction of the convert, like our "follow up" of a new Christian. The different rooms are different lessons about the Christian life. 1

7. The Cross and Sepulchre: Assurance. 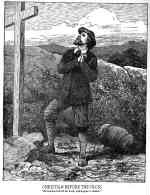 Christian loses his burden at the Cross, and is given a parchment roll: his "evidence" and "assurance" of going to heaven. Hopeful, like Bunyan, prayed "over, and over, and over" for God to reveal Jesus to him (Hab. 2:3), until God's word came with power into his soul. The three Shining Ones (angels, or the Trinity) show assurance is based on the Father's promise of pardon, the Son's righteousness, and the seal of the Spirit (Eph. 1:13). 2

8. The Palace Beautiful: Received into the Church. 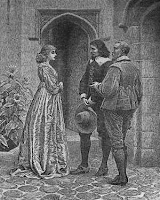 To enter the Palace Beautiful (the church), Christian has to pass the lions of persecution: Bunyan wrote Pilgrim's Progress while in prison for his faith. Christian tells his story to Piety and her sisters, because converts publically shared their testimony to be accepted into independent congregations.

So what can we learn from Pilgrim's Progress about conversion? We learn that conversion is sometimes simple and quick, and sometimes long and drawn-out: we shouldn’t expect all conversions to follow the same pattern. We learn that everyone who becomes a Christian experiences conviction of sin, and if people now don't feel much guilt or fear, this may be because we fail to preach God’s holiness and judgement. We learn that it may take time to gain assurance, and that we will gain it by looking to the cross of Christ. We learn that conversion is God's work, and takes place with his timing and in his way: our job is not to pressure people into the kingdom, but to support God's work in their hearts.

What could the Puritans learn from us? I think their emphasis on waiting for God to give the believer an experience of assurance, was bound to cause doubt and despair for vulnerable individuals like Bunyan. I think we're right to offer people assurance as soon as they accept God's promise of forgiveness in Christ, although it's also possible that full assurance will take time, and we need to remember the importance of establishing new Christians in their faith.

Now it's over to you. What was your experience of becoming a Christian? Was conversion a simple process for you, or a long and complex one? Do you identify more with Bunyan, Christian and Hopeful, who had to wait for assurance, or with Christiana, who received assurance immediately? Do you think it's common for people today to experience a deep sense of "conviction of sin"? What is your assurance based on? Have you ever lost it, and why?

1One of the most disturbing scenes is that of Despair in his iron cage, who has hardened his heart against God so that he can never be brought back to repentance. Bunyan is referring to two passages which he anguished over during his conversion: Hebrews 6:4-6 and 10:26-31. He probably also has in mind the story of Francis Spira, who was converted to Protestantism but fell back into Catholicism, and killed himself in fearful expectation of the judgement to come, a story which terrified Bunyan while becoming a Christian. I'm not sure that the picture of Despair is an accurate picture: it's possible to be completely hardened against God, but I don't think it's possible to have a softened heart, which longs for Christ's mercy, and not to receive it. (For an excellent discussion of the passages in Hebrews, see Frank Gaebelein's The Expositor's Bible Commentary on Hebrews to Revelation.)

2Why does Christian need to present his sealed parchment roll to get into heaven? The "seal", for Bunyan and other Puritans, was the work of God's Spirit in the heart, which bears witness to the reality of adoption (Eph. 1:13). A Christian may lose sight of his assurance for a time, like Christian in the Arbour when he fails to watch against sin, but the Spirit's work in his heart will always be the sign God has really called him, so the sealed roll must be shown to enter heaven (a bit confusing, I know, but who said allegory has to be consistent?).

Many of the Puritans interpreted the "seal of the Spirit" (2 Cor. 1:22; Eph. 1:13; 4:30) as a secondary experience after conversion, when the Spirit gives the Christian an inner assurance of their salvation. Some, like John Owen, the greatest Puritan theologian, came to re-interpret the seal as the Spirit himself, received immediately when someone puts their faith in Christ. I wonder if John Bunyan, who was a friend of John Owen, changed his views between writing Part I and Part II of Pilgrim's Progress, and came to see conversion and assurance as a simpler process, which is why Christiana is assured immediately. But I haven't read this anywhere: this is just a guess.

For further reading on Puritan views on conversion, assurance and the "seal", and how they affected evangelism, see chapters 10 & 11 of J.I.Packer's A Quest for Godliness; on conversion, assurance and the "seal" in Pilgrim's Progress, see chapters 6 & 10 of Barry Horner's Themes and Issues from Pilgrim's Progress.
Posted by Jean at 18:21

I hope Bec doesn't mind, but I found her comments on this post on my my own blog so helpful, that I thought I'd quote them here:

"I identify with both! My early teen-years were definitely assurance-free. I knew that I needed forgiveness and that wasn't good enough for God, but it was a worry that would come and go. Once I was 15 I realised that I was Christian and saved, but it wasn't until I was at uni that I really had assurance. Because it was at uni that lots of my Christian thinking started to fall into place more clearly and Christianity became more my own, apart from my parents, I also identify with Christiana.

As to whether I lose it or not, I think I have some times where I look at myself and my sin more and doubt, and other times when I look at Jesus more and am more assured. It is a bit of a continuum, but thankfully, I think I generally experience assurance. I do think it's sometimes a bit of a personality thing though. And a tiredness, hormonal-ness etc thing too.

I suspect that our society is less conscious of sin and right/wrong than in previous times. We tend to relativise it all. In that sense, I also suspect that people are less convicted of sin. Then again, the Holy Spirit is still at work convicting people of sin, righteouness and judgment. So, on the other hand, people do still experience conviction of sin.

What a great point she makes - of course every Christian is convicted of sin, that's the Holy Spirit's job, and you can't come to Christ without it! Even if we're not as aware of it these days.