In many ways, the story of Christian in Pilgrim's Progress is John Bunyan's story. You can't understand one without getting to know the other. So let me tell you the story of John Bunyan.

John was born in 1628 in the town of Elstow in England, in the white cottage on the left. His father was a tinker, a mender of pots and pans, and Bunyan inherited his trade.

It's hard to imagine more difficult teenage years: Bunyan's mother died when he was 15, his sister a month later, and his father remarried within a month. In his spiritual autobiography, Grace Abounding to the Chief of Sinners, he says "I was the ringleader of all the youth ... in all manner of vice and ungodliness" like "cursing, swearing, lying, and blaspheming the holy name of God".

Bunyan was drafted into the Parliamentary army at 16, to fight in the Civil War. He narrowly escaped death when another soldier offered to stand in for him one day, and died from a musket bullet to the head. The Parliamentarians defeated the Royalists in 1645, beheaded Charles I in 1649, and appointed Oliver Cromwell as Lord Protector of the new Republic in 1653.

John married his first wife - we never discover her name - when he was 21, and they had 4 children. His wife was as poor as him, but brought a precious dowry with her: two books, Arthur Dent's The Plain Man's Pathway to Heaven and Lewis Bayly's The Practice of Piety. Bunyan read these books, listened to her talk about her godly father, and began to think about spiritual things. He read the Old Testament, and tried to obey the commandments: he attended the Anglican church twice daily, and gave up swearing and Sunday sports, so that neighbours saw him as a reformed man.

But one day, in the nearby town of Bedford, he heard some poor women speaking about Christ and the wonder of the new birth, and began to read the New Testament. He longed for conversion, and battled many fears: Do I have faith? Am I elect? Has God called me? John Gifford, the minister of the independent church in Bedford, counselled and tried to comfort him. 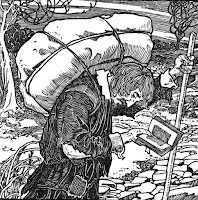 Bunyan struggled in the "miry bog" of conviction of sin and fear of judgement for many years. A brief time of comfort was followed by a long period when "floods of blaspemies" poured into his mind. He received some assurance of salvation when he and his family moved to Bedford and joined Gifford's church. But his struggles weren't over. Tormented by the fear that he had committed the unforgiveable sin, for 2 years Bible verses fought over Bunyan's soul, first accusing and then comforting him. Until one day, as he walked in the fields,

this sentence fell upon my soul. Thy righteousness is in heaven. And methought ... I saw with the eyes of my soul Jesus Christ at God's right hand; there, I say, was my righteousness ... Now did my chains fall off my legs indeed ... ; now went I also home rejoicing for the grace and love of God.

That was the remarkable day John Bunyan gained assurance.

These were years of peace for Puritans like Bunyan. Under Oliver Cromwell the state church became Presbyterian rather than Anglican: prayer books, organs in churches, vestments and rituals were abolished. Puritans filled the pulpits, and independent churches flourished. Bunyan's preaching gifts were recognised soon after his conversion, and he became a popular lay

preacher. He says he preached "what I felt, what I smartingly did feel": sin and guilt during his years of doubt, and the blessings of grace in Christ once he was assured. Hundreds came to hear him speak, and many were converted under his ministry.

But the time of peace for Puritans didn't last long. Oliver Cromwell died in 1658, and Charles II regained the throne in 1660. Anglicanism was enforced, and Puritan preachers were threatened with imprisonment, banishment or death. Bunyan was sent to jail for preaching to unapproved gatherings, and his young wife Elizabeth, who he married after his first wife died, miscarried their baby because of the shock. 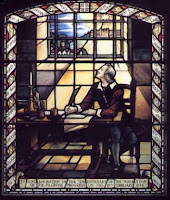 During his 12 years in prison, Bunyan made shoelaces to support his family, counselled Christians who came to visit, preached to prisoners, and wrote many books. You may have noticed that Pilgrim's Progress is the story of a "dream" of a man in a "den" or "cave": the den is prison, the dreamer is John Bunyan.

Bunyan was released from prison in 1672, when Charles II issued the short-lived Declaration of Indulgence, which allowed non-conformist pastors to preach. The Bedford church appointed him as their pastor, and he ministered to them for many years, under constant threat of punishment, including another 6-month imprisonment. 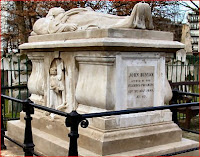 John Bunyan died in 1688 at the age of 60, away from home and family, from a high fever brought on by exposure during a preaching and pastoral visit to London. He died as he lived, preaching the truth about Jesus in the face of suffering, and crossed the River of Death to the Celestial City.

If you'd like to know more, read John Bunyan's wonderful spiritual autobiography Grace Abounding to the Chief of Sinners; read / listen to John Piper's encouraging talk about John Bunyan's life, To Live Upon God that Is Invisible; do a google search, and you'll find many potted biographies on the internet; or read one of the excellent biographies available (keep an eye on this page, once I've got my computer working again I'll add a helpful link with some reviews of JB biographies here!).
Posted by Jean at 09:58

Thankyou Jean! I just love hearing about the perseverance of others in the gospel of Jesus.

"Pilgrim's Progress" regularly brings me to tears. Especially when I remember the context in which it was written.

Knowing the struggles that John Bunyan went through certainly gives me a different perspective on his writing. As you read Pilgrim's Progress, you can almost physically feel the internal struggle that Christian goes through. To know that this struggle was also Bunyan's own personal journey makes the story even more meaningful. I loved learning the history behind this author! Thanks, Jean.

I'm so glad you enjoyed the potted biography, girls, it's good to know it encouraged you. I forgot to mention: read or listen to Piper's biography of John Bunyan, it's all about his suffering, and it will really make you cry, and give you much more of an insight into John Bunyan. And wait until you read my post on the women in Bunyan's life in a week or so ... you'll need your hanky for that one, for sure!! ;)