The Puritans: pilgrims and warriors 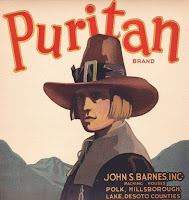 What do you think of when you hear the word “Puritan”? Gloomy men in black clothes and black, peaked hats with buckles, and their wives in white head scarves and demure dresses? Strait-laced kill-joys, opposed to dancing, theatre, and sport?

Maybe it’s vaguer for you than that. Maybe you think of the word “puritanical”, which the Online Dictionary says is “usually disparaging”, meaning “strict in moral or religious outlook”, with synonyms like “severe, disapproving, stuffy, fanatical, bigoted, prim, narrow-minded, prudish, strait-laced, rigorous, proper”. Not exactly an attractive portrait, is it?

“Puritanism” was a term of abuse given by opponents, as if I was to call you “kill-joy”, “pedantic” or “picky”. The Puritans were seen as narrow in their theology, finicky in their church practices, and overly scrupulous in their morality. You may have picked this up in Pilgrim’s Progress, where characters like By-Ends accuse Christian of being "strict", "precise" and "rigid". 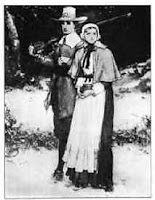 Let me give you a different picture. The Puritans were our forbears, the evangelicals of 16th and 17th England, who wanted to reform the English church further. Their clothes were normal, and often brightly coloured; they opposed many things we would also oppose, like bear-baiting and gambling; and they moved organs from churches into their homes, where they enjoyed music and dancing.

You won’t find yourself agreeing with everything they said. In Grace Abounding, John Bunyan agonised over playing sport on Sundays. Like many Puritans, he sought assurance not just by trusting God's promises, but by feeling them applied to him emotionally. Some Puritan strictures on church-life seem odd to us, although there are still churches today which don’t use musical instruments during the singing (I grew up in one!).

But the Puritans have an immense amount to teach us. Here are some of the things we can learn from them:

A big view of God.
The Puritans were men and women who knew their God: vast beyond our understanding, sovereign over every circumstance, rich in grace. Deeply satisfied in the relationships of the Trinity, God has no need of us: he creates and saves us freely, from the overflow of the infinite storehouses of his own love and joy.

Enjoyment of God.
I'm so glad the Puritans taught me that God rejoices in us, and calls us to rejoice in him. God's truth isn't just to be believed: it powerfully changes the heart and captures the emotions. Puritan sermons, books and diaries are filled with intense enjoyment of God. In Grace Abounding, John Bunyan exclaims, “Oh! It is a goodly thing to be on our knees, with Christ in our arms, before God.”

Finding God in the ordinary.

What a world we live in! A world where we may meet God around the next corner: Bunyan says, “Have you forgotten the close, the milk-house, the stable ... where God did visit your souls?” A world where we can read the story of God's dealings in our own lives, as we "call to mind the former days". A world where every flower, fly or lettuce leaf preaches a sermon: look out for the spider on the wall in Pilgrim's Progress Part II.

Catholics reverenced priests, monks and nuns who removed themselves from the world, but the Puritans helped to forge a new way: secular work sanctified by the service of God, recreation filled with God-given delight and meaning, and a warm, loving, God-honouring family life. In fact, they helped invent books on marital sexuality (to be engaged in with delight) and parenting (now there’s a thought!).

Caring for the weak.

Puritan ministers were not only passionate preachers, but tender-hearted pastors, entrusted by God with the care of the weak, like Great-Heart in Pilgrim's Progress Part II. The responsibility which we often hand over to secular counsellors was theirs: they counselled people struggling with anxiety, doubt and depression with wisdom, gentleness and sensitivity to the relationship between soul, body, mind and feelings.

Spiritual disciplines.
Every moment of the Puritan day had its suggested devotional activities: meditations for morning, dressing and bed-time, frequent reflection on God during the day, twice-daily Bible reading and prayer alone and with the household. We have forgotten so many valuable spiritual disciplines once cherished by Christians: meditation on God's truth, creation and heaven; Bible memorisation; and preaching to yourself.

A serious call to pilgrimage and to battle. 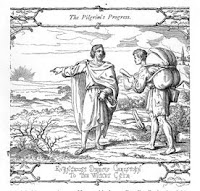 Yes, the Puritans were serious, although not in the rigid, joy-rejecting way you might think. For the Puritans, as you’re already realising from Pilgrim’s Progress, the Christian life was a pilgrimage through the alien country of this world, an easily-lost path beset with trials, temptations and suffering, and a constant battle again indwelling sin, the world, and Satan.

Look out for these things as you read Pilgrim’s Progress. This is just a start: there are many other things we’ll learn from John Bunyan as we look together at Pilgrim’s Progress. But I hope it helps you to get excited about the things you might learn.

If you'd like to know more about what the Puritans were like, and what they taught about God, I've found these two books the most helpful: J.I.Packer's Quest for Godliness and Lelan Ryken's Worldy Saints: The Puritans as they Really Were.
Posted by Jean at 07:09