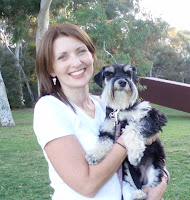 For the coming month our contributor is Michelle Philp. We thought before we heard her thoughts on this month's book Guidance and the Voice of God, we'd do a short interview so we can 'get to know' her a little first!

How did you come to faith in Christ?

Growing up in Wagga Wagga I don’t recall actually knowing any Christians pretty much until I was in year 12. A few years prior to that I had gone along to a church, been baptized and confirmed because I wanted to find out what it was about, but then stopped going because it didn’t seem to mean much. When I was in year 12 some friends organized for John Dickson’s former band ‘In the Silence’ to play at my high school. Those guys obviously thought Jesus was important enough to go around the country telling people about him, so I made a commitment at that stage to keep going to church until I figured out who Jesus was. I stayed in Wagga for another year and went to my local church where I learnt that Jesus’ death on the cross meant that I would go to heaven. It wasn’t until the following year though, when I was studying in Sydney, that I understood that Jesus’ death was paying the penalty for my rejection of God. At that stage I finally understood both what I was being saved from and what I was being saved for. Romans 5:8 was very significant for me in that whole process because it was through that verse that I understood I couldn’t earn my salvation but that God had saved me while I was still a sinner.

What do you most love about reading?

Lately I have been reading a lot of biographies: some missionary and some of people who just grew up in other countries. I love being transported to another culture and/or time, learning about different foods and customs and just being in awe of how God has made one humanity with so many different types of people.

What is your favourite novel?

I don’t know that I actually have a ‘favourite’ novel. I’m not someone who goes back and reads the same book again and again. Rather I’m ready for the next one and the new information/world/ideas/story it contains. I love variety, from period pieces to legal thrillers to biographies and historical fiction. I’ve just finished reading ‘Catherine’s Gift’ which is the sequel to ‘Hospital by the River’.

What book(s) has helped you most in growing in your knowledge of God?

I think the first Christian book I ever read was Kel Richard’s ‘The Case of the Vanishing Corpse’. High school friends at the local Baptist church in Wagga were advertising it and I convinced my parents to buy it for me for Easter. As a lover of detective novels, I got into it and it had a huge impact on me understanding that there was historical truth to this ‘Jesus stuff’. Since then there have been so many, but you could say that one helped the most because it was the first to open my eyes to the truth of the gospel.

In terms of books of the Bible, Romans has been and continues to be one that challenges my understanding of who Jesus is, what he has done and how my life must change as a result of that.
Posted by Ali at 07:00

Labels: contributor interviews, Guidance and the Voice of God