How old was Esther?

This week we have two posts from Di Warren, that help us build a picture of who Esther was and how she came to be where we find her in the book of Esther. 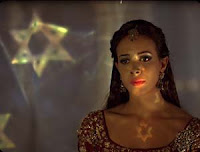 How old was Esther?

When I read about Esther, I can’t help wondering how old she was. In particular, how old was she when she first became Queen? And what was the age gap between her and King Xerxes?

Now obviously it doesn’t matter, as the text doesn’t give us the answer. But I think there are a few clues we can get.

We can work out how old Xerxes was, from history books (like the Greek historian Herodotus) as well as the internal evidence in Esther.

So what is clear, is that Esther was married to a rich, middle aged man!

But based on Middle Eastern practises, I suspect Esther was a teenager when she married Xerxes (which would make sense of why she submits to Mordecai in 2:10 and 2:20). So just say she was 15, then she had to deal with Haman’s plot when she was about 20.

Esther is very courageous in Chapter 4. But when you think that she is probably very young, it’s even more amazing.
Posted by EQUIP Book Club at 07:00

Yes, I think it is amazing that Ester was young AND so wise....but then she was God's woman in God's place at God's time...wasn't she :)
I think too...that this is a challenge to all mums to instruct our children/teens well , as Ester was no doubt well instructed by Mordecai as she grew up..so when her testing time came, she was able to pull through with amazing results....

I am having a hard time grasping the fact that in biblical times the men had multiple wives and slept with and had babies with many of them. I have a hard time with this. Was it cultural or biblical? Also, the age of these young girls is fascinating to me and scares me. How could it be right for a 40 year old man to sleep with 13 and 14 year old girls? What made that culturally acceptable then and not now? I am struggling with these concepts.

Thank you for taking the time to write in. It's just wonderful that you are thoughtfully considering the book of Esther and the Old Testament Scriptures.

The first thing to realise is that the King of Persia (the King in the book of Esther) wasn't an Israelite. He didn't know God or His ways, so we can't really expect him to follow what God might have thought on this. The Bible contains many accounts of people whose actions are not approved of by God and the Bible doesn't always comment on their actions.

Even so, the Kings of Israel also sinned in this area (see Solomon in 1 Kings 11:1-6). They too had multiple wives and children with them. But it's very important we understand that this was not God's ideal. In Genesis 2, we see Adam and Eve married - one woman and one man. Even Noah and Moses seemed to only have one wife each. However, without God ever giving his blessing to the practise, it seems that men of Israel started to practise marriage with more than one woman. In this sense it seems to be a cultural practise not that dissimilar to the nations around them.

We also need to bear in mind that women were almost completely reliant on marriage for their security. Singleness wasn't really an option (and was often seen as a sign of judgment or of immorality eg prostitution). There was no specific/organised welfare system for unmarried women who were not part of their father's household or protected by a husband. This is why widows were so vulnerable and God was so passionate to ensure they were looked after by Israel's leaders. Many men died in war and so there is some thought that there were many more women than men and hence marriage to multiple women (this isn't stated in Scripture but is more of a historical observation).

With all of this as background, God makes it very clear that this is not his ideal when he warns Israel against asking for a human king when he tells them that their human kings will exploit them and take the best of their daughters (1 Samuel 8). In fact in Deuteronomy 17, God forbids the kings to marry many women (Deuteronomy 17:17).

Jesus confirms God's plan for marriage from the beginning of creation is one man and one woman in a life long, one flesh relationship (Matthew 19:1-9).

So it seems that polygamy is a cultural practise rather than something specifically sanctioned by God.

As far as older men marrying women in their teenage years, the first thing we need to note is that up until the modern era, it was normal for women to marry in their early teenage years. Mary, the mother of Jesus would have been a teenager. As to whether it was common for older men to marry very young women, the Bible makes no comment on this. In books like Leviticus God gives very strict rules about who can marry (have sexual intimacy) with whom, but there is no mention of age. In this sense, the age issue seems cultural but it's not strictly prohibited by the Bible.

Of course when we look at the practises of different cultures in different periods of time, we need to think about any 'cultural views' we import into our conclusion about the practises of other cultures. For example, we tend to place a higher importance on romantic love for marriage. Whereas many other cultures and even our own cultures in times past, placed a higher value on financial security, intermarriage bonds and the bearing of children.

Having said this, it's fair to say that God is not for older men taking advantage of younger women or in fact any women. God's ideal has always been one woman and one man in a life long, one flesh, exclusive marriage relationship.

I hope this starts to answer your questions. It's great that you are thinking them through.

Thank you. You have answered my questions as well bc I have wondered the same thing. No wonder God had a plan for Esther for such a time in that time frame. God wanted to saved His people and had to use a willing vessel to do it. Esther knew God the King didn't but accomplished Gods strategy. What the enemy meant for bad, God turned it for the good. God Bless.

Thanks for your explanation, it helped me understand the circumstances better.