It's impossible to read The Sunday Philosophy Club without noticing how frequently Isabel finds herself musing about the decline that she sees around her in the morals and manners of her society:

Good manners depended on paying moral attention to others; it required one to
treat them with complete moral seriousness, to understand their feelings and
their needs. Some people, the selfish, had no inclination to do this, and it
always showed. They were impatient with those whom they thought did not count:
the old, the inarticulate, the disadvantaged. The person with good manners,
however, would always listen to such people and treat them with respect.

How utterly shortsighted we had been to listen to those who thought that
manners were a bourgeois affectation, an irrelevance, which need no longer be
valued. A moral disaster had ensued, because manners were the basic building
block of civil society. They were the method of transmitting the message of
moral consideration. In this way an entire generation had lost a vital piece of
the moral jigsaw, and now we saw the results: a society in which nobody would
help, nobody would feel for others; a society in which agressive language and
insensitivity were the norm.

Unlike Grace, of course (e.g. pp. 120-121), who is unashamedly committed to the view that society is locked in a steep and terrible decline, Isabel 'stop[s] herself', a little embarrassed at how old-fashioned the words sound as they come out of her mouth. But even as she stops herself, she confesses internally that her reluctance to embrace a train of thought that is so 'clearly correct' has little to do with the merits of the argument and much more to do with the intellectual fashions of the day. Along with her whole generation, she surmises, she has been been deeply affected by 'the subtle, corrosive power of relativism', even if, as a philosopher, she is unconvinced by the relativists' arguments. 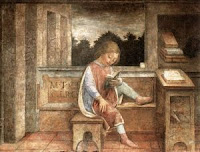 I found myself asking where my own sympathies ought to be, as a Christian belonging to (roughly!) the same generation and culture as Isabel, and exposed to the same kinds of cultural influence. When I find myself in a conversation about this sort of thing, should I be weighing in on the side of the O tempora, O mores! brigade? Should I be a bit more upbeat than that, taking note of all the positive changes that have happened over the last generation or two, or across the last few centuries? Or should I be agreeing with the relativists (though not for the same reasons) that no culture or generation is any better or worse than any other? And how should I be relating those sorts of observations and sentiments to the gospel and to the view of the world that I get from the Bible?

Here are a few thoughts I've had as I've mulled this issue over:

1. All have sinned
One obvious way that the Bible speaks to the issue is by reminding me that 'all have sinned and fall short of the glory of God' (Romans 3:23). This side of the Fall, there never has been a culture or a generation that we can look back to as the 'golden age' from which we have declined. Each culture and every generation is shot through with the effects of human sin, even though the ways that our sin expresses itself may differ from time to time and place to place.

To say this is not to say the same thing as the cultural relativist, who believes that there is no objective standard outside of our culture and our generation by which a judgement can be made on the people of other times and other - it is simply to observe (with Paul in Romans 2) that our own cultural values are not that objective standard, and we are not the judges, and apart from God's mercy in Christ we stand condemned before God, along with everyone else. However degenerate the binge-drinking, promiscuous, scruffily-dressed, graffiti-scrawling, foul-mouthed, doof-doof-music-listening, body-piercing, bus-seat-hogging youth of today may be, I gain no credit points with God for pointing my finger at them if I am not learning how to confess my own sins before him and ask for his forgiveness.

On the other hand, though, I think there is a sense that the Bible teaches us to expect that there may be some truth in the 'O tempora! O mores!' lament.

2. It is in the nature of sin to go 'from bad to worse'
To begin with, there is the general picture that the Bible paints of life in the last days, as a time when 'evil people and impostors will go on from bad to worse, deceiving and being deceived' (2 Tim 3:13, in a context in which Paul seems to be describing both the people of the world and the people of the church). There is something about the nature of sin that has a snowballing effect - the behaviour that we get used to doing and seeing can de-sensitize our consciences, so in turn we indulge in worse and worse behaviour, and the standards of our consciences sink further and further. 'Having lost all sensitivity,' Paul writes of the pagans in his own day, 'they have given themselves over to sensuality so as to indulge in every kind of impurity, with a continual lust for more.' (Eph 4:19)

3. The influence of the gospel waxes and wanes across history
And then, superimposed on that compounding cycle of sin, there are the cultural effects of the waxing and waning of the influence of the gospel in particular cultures and generations within history. So in the early centuries of Christianity, as the church's expansion within the Roman empire, it was the social and religious conservatives like Decius and Diocletian who launched the great persecutions against Christianity. The Christians were agents of change in attitudes to slavery, abortion and infanticide, and a host of other social evils, and the 'good old days' that their persecutors looked back to were, in some respects at least, actually quite bad old days. Similarly, at the time of the Evangelical Awakening and its aftermath in the eighteenth and nineteenth centuries, the natural alliance of evangelicals tended to be not with the Tories but with the social progressives, as evangelical Christians played a key role in the movements that made all sorts of changes, mostly for the good, to the manners and morals of England. At times like this, it can feel as if the natural shape of history is an upward curve of progress, one reform following another. But when the influence of the gospel is declining in a culture (by all outward measures, at least) we should not be surprised if that has consequences, as the residual influence of our grandparents' Christianity (whether it was nominal or genuine) begins to leak out of the culture. In such a time, there will often be good cause to lament at a lot of the changes that happen from one generation to the next. 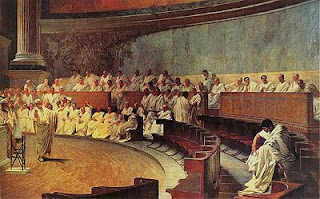 At one level, I suspect, a conversation like this is an entry point for the gospel, a chance to push the conversation back from symptoms to diseases, from effects to causes; an opportunity to steal a few lines from Isabel Dalhousie about what happens (p. 179) when people have 'no idea of a life beyond this one'; an invitation to find a way to say something along the lines of Romans 1:18-32.

At another level, I think, it can be a red herring, a way of pointing the figure, Cicero-like, at the Catilines of our day, and dodging the uncomfortable truth that God will judge me too - in other words, an occasion that calls for something more like what Paul says in Romans 2.

The trick is working out which (and having the boldness to say either)!

Images: The Young Cicero Reading, 1464 fresco, now at the Wallace Collection.
Cicero Denounces Catiline, fresco by Cesare Maccari, 1882-1888. Both from Wikipedia.
Posted by Nicole at 07:00