Did I Kiss Marriage Goodbye - Pt 6 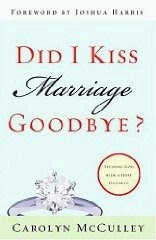 It’s not a completely obvious thing, I have found, to work out the tangible ways in which single women can live a life uniquely devoted to Christ, in a way that married women cannot (which would seem to be the point of 1 Corinthians 7:25-35) and how this fits with the many other passages of scripture addressing women that talk about being 'busy at home' (Titus 2:3-5 and 1 Timothy 5:14). I’m still working through all that this means in an age when most single women have full-time jobs outside the home, which consume their time and which they need to support themselves. (And as another woman asked, in the foreword to Recovering Biblical Manhood and Womanhood: ‘How do singles balance a career that requires more than forty hours a week plus other outside commitments (continuing education etc) with the “extraordinary opportunity for single-minded investment in ministry?”’) But I’m also wary of creating a chasm in biblical womanhood between married women and single women. God created us male and female (Genesis 1:27). That is the defining difference, not married or single.

A different problem is that most people who are single don’t actually know that they are going to be single (and didn’t choose it), so it's not reasonable to expect that they have shaped their life to be, or are shaping it to be, something that it is distinctively different from those who do get married—nor am I certain that it should be, or of what that would actually look like! (What I mean by this is, if single women aren't to be living like they are preparing for marriage, then should any woman, ever, be living like she is preparing for marriage (before she is engaged)? If so, then at which point would you tell single women to change?) There is a wide spectrum of thought on how single women are to live out their singleness, and the evangelical Christian culture of North America seems to have an understanding of it that is not common in Australia. You may need to keep that in mind through this next section of the book. It’s an area that I think needs a lot more thought!

However, thankfully, hospitality is quite straightforward: the commands to practice it extend to us all, and the bible gives specific exemplary cases of single women, some who appeared to run successful businesses (eg Lydia), doing just that (though I couldn't actually find hospitality being extended to those outside the household in Proverbs 31). And as John Piper points out (as we saw two weeks ago here) singleness bears witness to the fact that the family of God is one of regeneration and not procreation (though of course it includes procreation within this regenerated family), which has implications for relationships within God’s family and provides single people with the impetus to demonstrate this in our hospitality (see chapter 10 in This Momentary Marriage). Single people will also have different opportunities to interact with the community around them and can reach out to the people that they meet outside of God’s family through hospitality.

As single women who often live in temporary, shared dwellings we can let this one slip. Or we can feel unequal to the task on our own. If the latter is you, then be encouraged by this paragraph (from chapter 10 of This Momentary Marriage):

“God is able to make all grace abound to you, so that having all sufficiency in all things at all times, you may abound in every good work” (2 Cor. 9:8). If you are afraid of hospitality—that you don’t have much personal strength or personal wealth—good. Then you won’t intimidate anybody. You will depend all the more on God’s grace. You will look all the more to the work of Christ and not your own work. And what a blessing people will get in your simple home or your little apartment.

I really liked Carolyn’s suggestion of teaming up a friend to pull off larger events. I had a number of people over for dinner last year and there were a few moments after they arrived where I was trying to say hello, offer drinks, keep an eye on the food and do the last minute preparations, show the parents where to set up the Portacot etc all at the same time—which soon settled down but would have been easier if I’d collaborated with someone.

I also like the encouragement from Carolyn to include married people and families in our hospitality. On one occasion last year I asked a family with four kids to my apartment for lunch after church, thinking we’d just have to eat and then bolt to the park up the road or the kids would go crazy. A few extras came too such that the kids ended up on a picnic rug in the middle of the floor and it was slightly chaotic, but no one seemed to mind, and we never did go to the park. Weeks later when I was helping out with holiday Sunday School the five-year-old piped up, after I’d introduced myself to the class, and said, obviously feeling rather chuffed: "we went to her place for lunch". I was warmed that she’d remembered and seemed pleased about that, and it spurred me on that even squeezing large families with all of their children into my unit is worth doing.

One final thing of note, which I gleaned from This Momentary Marriage, is how 1 Peter 4:7-11 exhorts us to show hospitality without grumbling, which actually confirms that it can be hard work, but is still to be done. I think this has a particular point of application in shared housing. I am getting a new flatmate at the end of the month, and when we met up to talk about it she asked me 'Do you mind if I have people over?', because this is often a point of tension in flatting arrangements. So rather than groaning inwardly and wishing that she wouldn’t, or somehow making that difficult, because it feels like an invasion of my home space with people I don’t know, I can be willing and accommodating and welcome her guests as part of the hospitality that is done in the home I live in.

Here are Carolyn's questions for this chapter:

This Momentary Marriage by John Piper. Chapter 10 is called Marriage, Singleness, and the Christian Virtue of Hospitality.

My Liberation from Feminism by Carolyn McCulley. This article shows the way that Carolyn has applied Titus 2:3-5 to herself as a single woman. As I have mentioned already this is something that I am still thinking through, not because I don't like what I read here, but because I am just not certain of how this passage is to be taken up by single women.

Let me Be a Woman by Elisabeth Elliot. This book was first written in 1976 and I read it a very long time ago. You might wonder whether it was written on another planet, because it is so counter to the culture we live in, and it was written to her daughter prior to her marriage, but it has things to say about what it actually means to be a woman.