Entering the world of Pilgrim's Progress 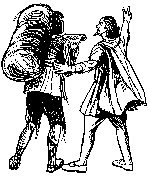 Imagine you're about to go on a journey. You're not travelling in the padded seat of an aeroplane, across the globe to a foreign country, but in a time-machine, to another culture in another century. What's more, you're moving across dimensions into a spiritual plane, where everything happens on the level of the human soul.

Opening the first page of Pilgrim's Progress is like entering another world. Not just the mysterious world of a story, with its own characters and landscape, but also the world of another time, when Christians thought and wrote differently from us. It's a fascinating world, but because there might be a bit of culture shock, I'll give you a few hints about entering the world of Pilgrim's Progress:

We ought not to be thinking "This green valley, where the shepherd boy is singing, represents humility"; we ought to be discovering, as we read, that humility is like that green valley. That way, moving always into the book, not out of it, from the concept to the image, enriches the concept. (C.S.Lewis "The vision of John Bunyan", in Roger Sharrock (ed.), The Pilgrim's Progress: A Casebook p.198)

I'm having a little difficulty with this section:

True, there are, by the direction of the Law-giver, certain good and substantial steps, placed even through the very midst of this slough; but at such time as this place doth much spew out its filth, as it doth against change of weather, these steps are hardly seen; or, if they be, men, through the dizziness of their heads, step beside, and then they are bemired to purpose, notwithstanding the steps be there; but the ground is good when they are once got in at the gate.

Could you help me understand what the steps represent? I think some of what is tripping me up is the language, but I have enjoyed reading it so far.

Hi, mom of e! Thanks for the question. We'll be talking about this later this week, but here's a sneak preview ...

John Bunyan's marginal notes, which your edition may not have, explain that the steps are "the Promises of forgiveness and acceptance to life by Faith in Christ".

In his autobiography "Grace Abounding", one of the reasons Bunyan gives that his own conversion was so long and torturous, is that he had trouble simply believing the promises. I guess he's encouraging his readers, when they are overcome with sin, guilt and fear of God's judgement, to believe the promises of God: that he will forgive everyone who puts their trust in the death of Christ.

Hi Jean, thanks for your helpful comments so far. I'm really enjoying Pilgrims Progress so far and am looking forward to chatting about it!

I can't believe I've never picked this up before. I've always heard about it but no one has ever really encouraged me to read it.
I'm really loving it. It is just so rich in biblical imagery and metaphors that i feel uplifted every time i read it.
Thanks for putting this on the book list.

I remember my dad reading this to me as a child. Even then the imagery had a great effect on me. I am really enjoying it now as an adult, finding a new depth of meaning and relevence to my own spiritual journey.
Wendy
PS Your chioce of favourite books Jean are all favourites of mine.

Thankyou for your comments, it's lovely to hear from you all, and I'm so glad you're enjoying the book! Sorry it took me a bit of time to get back to you, my computer crashed. Please keep commenting, asking questions, discussing issues, whatever: it makes EQUIP book club all the richer!