Jennie Baddeley is taking us through Practical Theology for Women, by Wendy Alsup, for the month of September (starting Wednesday, so there is still time to get yourself a copy of this great book and join in!). We have interviewed Jennie in the past here, but thought we ask her a few more questions before we begin. 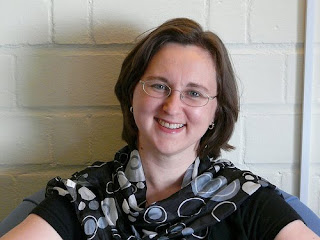 Favourite book you've read in 2009?
A whimsical series which starts with Temeraire by Naomi Novak. It's an historical-type novel, based in England back in the era of the Napoleonic wars (early 1800's). It has a wistful, gentle tone with solid, likeable characters and some of the values of the time, such as honour and honesty and so forth. The plot is of the high adventure type genre, but without being too fast-paced. I sometimes find more gritty 'realistic' books emotionally draining to read, but this one was soothing: not unlike a glass of cool lemonade on a hot, weary day. Oh. And there are dragons.

Favourite new author you've discovered over the last 12 months?
Mem Fox. Having become the person who most reads to a little boy, finding books that use language well, have a bit of narrative and great pictures has become a bit of a quest. Thankfully, some lovely Australian friends have sent us several books by Mem Fox. I love the words, the rhythm and rhyme and the gentle narrative, and they seem to be well illustrated. They are fun to read, which is good because they are requested frequently by a certain little boy.

Who have been your role models of Christian womanhood?
There have been many: people I've met and read about, and I think most of the women I interact with either challenge or encourage me (or both) as I continue to think through what it means for me, a woman, to follow Jesus.
Two women had (and have) a significant impact on me.
The first was Narelle Jarrett. She startled me out of despondency. I had tried, unsuccessfully, to fit a fairly unhelpful stereotype of Christian womanhood for a while when I met her. Narelle was quiet and thoughtful and committed to thinking things through herself from the Bible, which in itself challenged the stereotype I had encountered. This made me go back to the Bible and start thinking all over again. Since I've known her, Narelle has never stopped encouraging me to trust God and be amazed by who the Lord Jesus is and to use everything I am and have in his service. I like the way she is always trying to do that herself, and that she enjoys talking and thinking about Scripture.
The second person is Christine Jensen. I have found the way Christine is a 'ministry wife' to be tremendously encouraging and challenging. She is unquestionably supportive of Peter, but never simpers. I like the way she models what a strong woman looks like as a wife; it puts to rest the lie that submissive women are weak-minded and pathetic and instead demonstrates how active, caring and articulate such a woman can be. And she never seems to be restricted in whatever configuration that role might take, but embraces the numerous opportunities that it gives her. The times I've been in small groups and prayer groups with Christine I have enjoyed watching the way she always seems to be thinking about how to apply the Bible to her own life as well as helping other people do likewise.
I think both Narelle and Christine have made me realise that I need to live my life in view of Jesus' return, trying to figure out whether I'm pleasing him rather than trying to fit a mould or please other people. It's both liberating and sobering: what Jesus thinks of us is all-important.
Posted by Ali at 07:00

Hi jennie,
You said (wrote) "trying to figure out whether I'm pleasing him rather than trying to fit a mould or please other people". I love that!! Peer pressure within the christian community is huge, I feel.
Can't wait to read you!
Smiles, Ingrid