On social Darwinism and the role of women

I have one my shelf a documentary that has won many awards and been translated into 27 different languages, called Faces in the Mob, which was filmed at my University Honours research site. Faces in the Mob is story of two eastern grey kangaroo joeys. One of these joeys has a very good mother, who comes from a long line of good mothers and a “family” that has consequently contributed greatly to the gene pool of the kangaroos in the valley. The other joey has a bad mother, who has lost all previous offspring as a result of her poor training, and thus contributed nothing to the next generation. 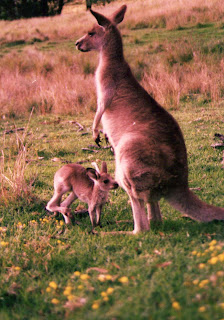 Eastern grey kangaroos invest about 18 months into each joey, toilet training them (yes, there is no doing scats inside the pouch), teaching them to obey signals to return to the pouch, sometimes immediately, which can otherwise be fatal if a dingo has been spotted, teaching them how to feed, making sure they don’t wander off and that they stay with the mob etc. Note the alertness of the mother kangaroo when her young is out of the pouch in this photo, which I took at the film location.

Sadly, in Faces in the Mob, this particular joey of the bad mother dies also, after getting left behind by the mob, lost and then attacked by a dingo (and I cry every time).

So, having studied biology, I find it incomprehensible to conclude that females, of any species, which need to survive childbirth and contribute greatly to the raising of offspring, are outside of the evolutionary process (whether or not you believe in an evolutionary process just run with this argument for now). A species, at the very basic level, lives or dies on its ability to raise offspring. The absurdity of social Darwinism and the ideas of the feminists (see the quote on pp 76-77 from Germaine Greer, and also Simone de Beauvoir’s statement that “The fundamental fact that from the beginning of history … prevented [a woman] taking part in the shaping of the world was her enslavement to the generative function”, taken from The Essence of Feminism) arise only from the devaluing of this contribution. And it would seem to be only in very recent history that we have completely lost sight of the connection between mothering and the survival of children and continuation of humanity, between this very generative function and the shaping of the world.

In comparison to females, male eastern grey kangaroos fight their way to the top of the mob, and stay there as the breeding male for only as long as they can fight off all contenders, so they need to be large, muscular and skilled in fighting. To loosely translate the arguments of feminism and social Darwinism into the kangaroo world, it would be the equivalent of saying that female kangaroos missed the opportunity to develop their fighting skills because they were kept too busy honing their skills in raising offspring — and so were left out of the evolutionary contribution and progress. Does that not present as ludicrous? 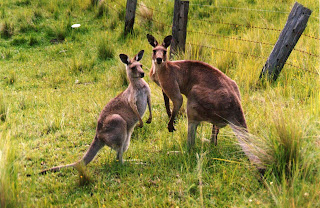 Note in the picture at right the very obvious difference in biology of males and female kangaroos. The species would not be nearly so efficient or successful without it. And nobody has ever been so absurd as to blame the smaller size and biological function of females on oppression by males (as Germaine Greer does, pg 76).

Obviously my illustration is going to fall over at points, because humans are made, specifically made male and female, in the image of God in a way that animals are not. And as Christians we most definitely do believe that an individual can contribute greatly to other individuals and to humanity, both now and for eternity, through means other than rearing their own biological children, and we acknowledge that women do possess skills and gifts not directly related to child-rearing, in the same way that men possess skills and gifts not directly related to the means by which they earn an income, and I am thankful for the opportunities women have to study and have jobs and thankful for a society that steps in in cases of extreme neglect of children, but this illustration helps to illuminate the problems with (and indeed the ridiculousness of) the criteria feminists use to evaluate the contribution of women to society and humanity – don’t you think? Female kangaroos don't benefit their species by fighting too, but by birthing and rearing their offspring. It’s as Elisabeth Elliot said (see chapter two): "To subject femininity to the criteria of masculinity is as foolish as it would be to judge meat by the standards of potatoes."

Men and women are wonderfully and functionally different – it was always meant to be so!
Posted by Ali at 07:00

A very good piece of writing. I agree that Men and Women are seperate but both bring so much to the table under God's wisdom. Not only have feminsists been trying to 'man up' women but sadly they have been asking men to de-masculinize. (if that is infact a word - you're the editor, you'll know). My friend is male school teacher in a primary school as has been for a long time. He is the only male and one of about 4 male primary school teachers in my city. He said it is really bad the influences that some feminist teachers have on the young boys with their doctrines. Many of these boys do not have a Father at home (or a bad example of one) and then they are stripped of anything that smacks of masculinity in the school. They are punished and belittled and told it is wrong if any form of mascuinity rises up. This then brings major issues later in life during high school and as young adults. I know for a fact that men are very confused in todays society and have had their position, authority and needs taken from them. Then we have single women in their late 20's and 30's shouting - "where are the real men?" You are right when you say God has made us different and he has done it with good reason. When we deny this creativity and deem it as wrong and when we try to tell men and women to be something they are not then this is a recipie for disaster. Also, please note that I in no way condone uneccessary violence, disrespect of women, mob mentality or other meathead behavior. This is not what I mean by real Godly masculinity.

Thanks for coming by Pete! I am glad I made sense to somebody. Yes, it would seem that the feminists not only want to change women but change men too, which is no very great success, but there are ways that it comes back to haunt them ...

That sounds like a sad situation in your local primary school. I do hope they find some models of true masculinity somewhere.

This is a really helpful illustration, Ali.

Well, I'm glad to hear that Bec. I am glad somebody else was on my wavelength :).