The Emancipation of Domesticity

I thought some readers might appreciate this quote from GK Chesterton, taken from The Emancipation of Domesticity: 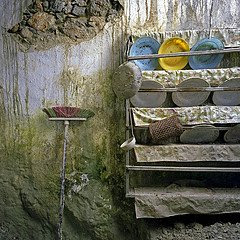 Picture from flickr.com
Supposing it to be conceded that humanity has acted at least not unnaturally in dividing itself into two halves, respectively typifying the ideals of special talent and of general sanity (since they are genuinely difficult to combine completely in one mind), it is not difficult to see why the line of cleavage has followed the line of sex, or why the female became the emblem of the universal and the male of the special and superior. Two gigantic facts of nature fixed it thus: first, that the woman who frequently fulfilled her functions literally could not be specially prominent in experiment and adventure; and second, that the same natural operation surrounded her with very young children, who require to be taught not so much anything as everything. Babies need not to be taught a trade, but to be introduced to a world. To put the matter shortly, woman is generally shut up in a house with a human being at the time when he asks all the questions that there are, and some that there aren’t. It would be odd if she retained any of the narrowness of a specialist.
Now if anyone says that this duty of general enlightenment (even when freed from modern rules and hours, and exercised more spontaneously by a more protected person) is in itself too exacting and oppressive, I can understand the view. I can only answer that our race has thought it worth while to cast this burden on women in order to keep common-sense in the world. But when people begin to talk about this domestic duty as not merely difficult but trivial and dreary, I simply give up the question. For I cannot with the utmost energy of imagination conceive what they mean. When domesticity, for instance, is called drudgery, all the difficulty arises from a double meaning in the word. If drudgery only means dreadfully hard work, I admit the woman drudges in the home, as a man might drudge at the Cathedral of Amiens or drudge behind a gun at Trafalgar. But if it means that the hard work is more heavy because it is trifling, colorless and of small import to the soul, then as I say, I give it up; I do not know what the words mean.
To be Queen Elizabeth within a definite area, deciding sales, banquets, labors and holidays; to be Whiteley within a certain area, providing toys, boots, sheets, cakes and books, to be Aristotle within a certain area, teaching morals, manners, theology, and hygiene; I can understand how this might exhaust the mind, but I cannot imagine how it could narrow it. How can it be a large career to tell other people’s children about the Rule of Three, and a small career to tell one’s own children about the universe? How can it be broad to be the same thing to everyone, and narrow to be everything to someone? No; a woman’s function is laborious, but because it is gigantic, not because it is minute. I will pity Mrs. Jones for the hugeness of her task; I will never pity her for its smallness.
Posted by Ali at 07:00

What a wonderful quote, Ali! Having chosen to be a full-time, stay-at-home mum (many moons ago!) I would say that one of the most difficult aspects of this choice was the attitude of others towards me, in that role. Chesterton's critique is very astute because he focuses on the assumptions people make when forming judgments about the importance (and value) of a mother's role in raising children. In a few eloquent paragraphs, he not only affirms the value of the mothers' task, he also highlights the narrow perspective and limited understanding of their detractors. Great stuff! :)

I'm glad you thought so Lee! Yes, I thought he really hit on something and I really appreciated his discussion of the generalist and the specialist.