Esther, Compromise and Uncompromise (by Nicole)

I've been re-reading Esther in the lead up to EQUIP this Saturday. I've already noticed a few things I've never noticed before, and it's already got me thinking.

One of the things I've been pondering is the way that Esther's Jewishness remains so hidden for most of the story. She's changed her Jewish name Hadassah to the Persian name Esther (2:7), and she keeps her nationality a secret (2:4, 2:10). Not only that, but she's living the life of a princess, and it seems that she got into that privileged situation by playing a very successful game of please-the-Persians (e.g. 2:15, 17). She'd have to be about the most compromised Jew in the whole of the Persian Empire!

There's a lot about Esther's story that reminds me of my own spiritually dangerous situation as a modern, middle class, Western Christian. I live my life surrounded by paganism and prosperity, and I feel such a strong pull to blend in to the pattern of the non-Christian world around me. Too often I do.

The story of Esther is a great encouragement for people like me! So much about Esther's life in the palace would have tempted her to think that her chance to be loyal to God and his people had long since passed - that she had made her choices and chosen her lifestyle, and that it was too late for anything different. And yet, when it comes to the crunch, she's incredibly bold and brave. She's prepared to risk not just her luxuries and her comforts but even her life for the sake of her people (4:15-17). 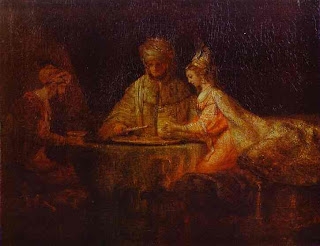 If there are areas of my life in which I have blended in too comfortably with the lifestyle of the non-Christian world around me and made compromises that I should not have made, the story of Esther gives me hope that it's not too late to un-compromise. There's a strong encouragement to seize the moment that God puts in front of me and be willing to risk security and comfort and approval to be loyal to God and his people.

Ali and I are going to share some more of our reflections on the day, and next week. In the meantime, what have you noticed about Esther?

Pic: Ahasuerus and Haman at the Feast of Esther, Rembrandt
Posted by Nicole at 07:00