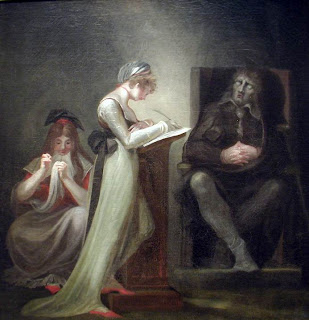 Milton Dictating to His Daughter by Henry Fuseli

On His Blindness
by John Milton

When I consider how my light is spent,
Ere half my days, in this dark world and wide,
And that one Talent which is death to hide,
Lodg’d with me useless, though my Soul more bent
To serve therewith my Maker, and present
My true account, least he returning chide,
Doth God exact day-labour, light deny’d.
I fondly ask; But patience to prevent
That murmur, soon replies, God doth not need
Either man’s work or his own gifts, who best
Bear his milde yoak, they serve him best, his State
Is Kingly. Thousands at his bidding speed
And post o’re Land and Ocean without rest:
They also serve who only stand and waite.

John Milton (1608 – 1674), The Penguin Book of English Verse, Penguin Books (London, UK), 1956, p 147. [The final line of this poem was the official motto of The Royal Observatory Corps in Britain whose members served on the home front for many years, and with particular distinction during WWII.]