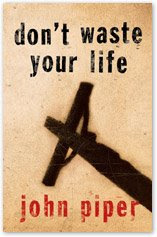 Why don’t people ask us about our hope? The answer is probably that we look as if we hope in the same things they do. Our lives don’t look like they are on the Calvary road, stripped down for sacrificial love, serving others with the sweet assurance that we don’t need to be rewarded in this life. Our reward is great in heaven ... If we believed this more deeply, others might see the worth of God and find in him their gladness. (DWYL, p 109)

If you were arrested and accused of being a practising Christian would there be enough evidence to convict you?

A number of years ago David Cook, Principal of Sydney Missionary and Bible College (SMBC) read a book by Michael Hart called The 100: A Ranking of the Most Influential Persons in History in which the author ranks not the best, or the greatest people in history, but rather the most influential. We might expect Jesus to be right up there at Number One, but unfortunately he is ranked at Number Three. According to David Cook, “Hart, who claims to be neither a Muslim nor a Christian, has put Mohammed first because in his observation of Muslims and Christians, Mohammed has far more influence over the lives of Muslims than Jesus Christ does over the lives of Christians”(p 10). Or as Cook puts it: “… Christians, from [Hart’s] observation, do not widely follow, believe or take heed of their Lord and Master, Jesus Christ” (David Cook, The Unheeded Christ, Christian Focus Publications Ltd (Fearn, Ross-shire), 2008, p 10).

In three excellent chapters towards the end of Don’t Waste Your Life, Piper exhorts us to think carefully about what we do for God, and why. Making much of Christ from 8 to 5 is probably the best and clearest thing I have read on the Christian understanding of work. His challenge to all Christians to adopt a wartime lifestyle, and his emphasis on the imperative of mission in a world where so many still have not heard the gospel, deserve reading and re-reading. But I think it’s worth reminding ourselves that the ‘doing’ aspect of obedience finds its foundation in the ‘believing’. As Christopher Ash so aptly puts it:

On-going obedience is the outworking of our salvation (Philippians 2:12). It is not a subsequent thing – a consequence of faith; it is faith in its concrete expression. (Christopher Ash, The Briefing, Issue 365, Matthias Media (Kingsford, NSW), February 2009, p 21.)

If I read his words closely, John Piper makes it clear that a single God-centred, Christ-exalting, Bible-saturated passion can only come from a belief in the saving work of Jesus for sinners. He is adamant that the enjoyment of God’s blessings this side of the cross (and in the life to come) should point me in constant thanks and worship to the Saviour who died, and rose again. Giving God the glory, living for him, and dying for him, is not a waste, but the only life worth living.

I’d like to give the final words to an ancient preacher:

The end of the matter; all has been heard. Fear God and keep his commandments, for this is the whole duty of man. For God will bring every deed into judgment, with every secret thing, whether good or evil. (Ecclesiastes 12:13-14)

Lee, I just wanted to thank you for your helpful posts on this book. I've thoroughly enjoyed reading it and have been provoked to much thought by your comments! I think I will still be considering the issues they raised a long time from now, so thanks for challenging and spurring me on to godliness!

Hannah, it has been my pleasure and privilege to read John Piper's book and to write and share my own musings on it. I'm glad that you have found them helpful - even thought-provoking! Our God is merciful and kind, choosing to use each one of us in spite of our weakness and imperfections and enabling us to grow to become more like Jesus. Praise Him! :)