When I first picked up this book I expected to be reading about the meetings of a the club alluded to in the title - the Sunday Philosophy Club. As I read on, I kept waiting for the club to turn up in the story line, perhaps playing a key role in solving the mysteries surrounding the death in the opening chapter... And yet by the end of the novel the club still hadn't met!

In fact, I got the distinct impression that the club had never met, and wasn't likely to in the near future. This interaction between Isabel and her niece Cat, gives us a little insight into what is going on:

'I've decided that I'm not too keen on the public', said Cat. 'I'd like to have a private shop. People would have to apply for membership before they could come in. I'd have to approve them. Rather like the members of your philosophy club or whatever it is'.

'The Sunday Philosophy Club is not exactly very active,' she said to Cat. 'But we'll have a meeting one of these days.'

'It's such a good idea,' said Cat. 'I'd come, but Sunday's a bad day for me. I can never get myself organised to do anything. You know how it is. You do know don't you?

Isabel did know. This, presumably, was what afflicted the members of the club'. (pp.21-22)

And then there is a similar interaction between Isabel and Jamie near the end of the book (p.181), where Isabel laments the fact that the club has never met.

The club seems to be a metaphor for the place of serious philosophical conversation in our society today - it's a 'Sunday' pursuit, on the margins of the week, and one that doesn't rank particularly highly amongst all the other things one might do on a Sunday.

There's an irony here, of course: the Sunday Philosophy Club may never get around to meeting, but a novel called The Sunday Philosophy Club is a best seller (along with Alain de Botton, Jostein Gaarder and the rest...)! Obviously there's some sort of a market for popularised philosophy, presumably reflecting an interest in talking about morality, the meaning of life and so on.

It got me thinking about our role as Christians, and the place we ought to have in the (pop-)philosophical conversations of our own society. The obvious NT example is Paul in Athens (a city which, according to Luke's amused description in Acts 17:21, must have seemed to a visitor to have been in 'Philosophy Club' mode seven days a week!). Paul doesn't suddenly turn into a Greek philosopher, but he does seem to be deliberate in preaching the gospel and explaining the big picture of the Bible in a way that interacts with the philosophical debates and ideas of the day. He is happy to spend some time answering questions from a bunch of Stoics and Epicureans in the Areopagus. 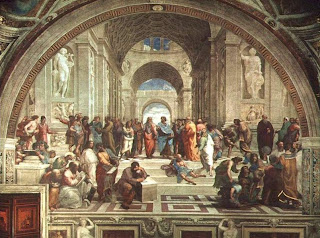 Does Luke present that interaction in Athens as the exception (contextualisation for those crazy Athenians!) or the rule?
Judging from Acts and the NT letters, the gatherings of the early Christians certainly seemed to have room in them for long serious conversations about big issues. Edwin Judge's famous description of ‘the talkative, passionate and sometimes quarrelsome circles that met to read Paul's letters over their evening meal in private houses’ (‘The social identity of the first Christians’, Journal of Religious History, 11/2, 1980, 212) paints a picture of a gathering that was more like a philosophy club than a religious ritual.
And yet there were also huge differences. The content of what the first Christians believed was based on what God had said and done in Christ, in fulfilment of the Scriptures, not on human ideas and speculations. The people who gathered to talk about it were not the leisured elite, sipping their lattes, but a motley assortment of Jews and Gentiles, men and women, slaves and free. And the conversation - however much it might have intersected from time to time with the ideas and arguments of the philosophers, was directed toward the glory of God and the earthy concerns of everyday life.

It is this direct and personal involvement with other people in a tormented society, this human situation, that marks Paul off from those who worked professionally in the Greek philosophical tradition… [M]ost philosophers were men of means and detachment, withdrawn to a large degree from ordinary life and its pressures, which they contemplated from the security of their conceptual systems. Paul was working from a totally different starting point. (Edwin Judge, ‘St Paul and Socrates’, originally published in 1973; reprinted in The First Christians in the Roman World, 670-84: 674.)

So what about us and our conversations? Do you think that we ought to be a bit more serious in the way that we relate the gospel message to 'philosophical' questions about meaning and morality? Does reading books like The Sunday Philosophy Club help us in asking questions that get us to integrate our understanding of the Bible with the way we live and view the world, or is it just light entertainment? Does it help us in communicating the gospel to our next-door neighbours, or is it only ever going to be helpful for the sort of tiny, elitist slice of society who might theoretically be interested in coming along to a Sunday Philosophy Club (but would never bother showing up in practice anyway)?
Let us know what you think - I'd love to hear your thoughts and experiences about how this sort of thing has played out in life and conversations for you.

Just wanted to check: will we know which posts are by Nicole and which by Dani?

Yes, I was planning on putting Dani's name up the top of her posts.