Hume, Isabel, and Christianity (by Dani)

Last week, I wrote about Isabel and moral relativism. In my next two posts I’ll look at two philosophers whose ideas Isabel interacts with in The Sunday Philosophy Club – Hume and Kant. If you’d like to read more, I again recommend the Stanford Encyclopedia of Philosophy. Under ‘Kant’ there’s an especially good article discussing the moral theories of Hume and Kant.

David Hume was a Scottish philosopher (like Isabel!), and Immanuel Kant a German philosopher. They are two of the greatest and most influential philosophers in Western history. Both were born into Protestant families: Kant was born and remained a Lutheran; Hume was the son of a Presbyterian clergyman but by the time he was writing, had rejected religious belief. Both wrote in 1700’s (Hume the mid-1700’s, Kant the latter half of the century); and both develop their moral theories without relying on particular religious beliefs. The theories they develop, though, are very different.

Hume’s moral philosophy is more about observing people’s moral experience and accounting for it, than it is about laying out a system of rules to follow or virtues to cultivate. He rejects the traditional view that reason tells us what is good and evil, claiming that it can only distinguish truth from falsehood, not right from wrong. Hume doesn’t think reason can motivate us to action, either. Only the passions like pleasure or pain can do that, and since morality is pointless unless it can motivate us to act, he turns to these to find the basis of morality. He discovers when we contemplate some actions or personality traits we feel pleasure, others cause us to feel uneasy. Those that cause us pleasure we call virtuous; those that give us pain we call vices. Thus the passions provide Hume with both the origin of, and motivation for, morality. This view, and others like it, are sometimes called sentimentalism or moral sense theories. 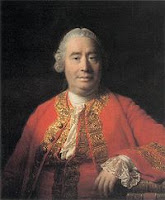 You might be thinking that this looks like an extreme version of moral relativism – what’s right for me is just what makes me feel good and what’s right for you is what makes you feel good. But this is not at all what Hume has in mind. First, Hume assumes human nature is something we all have in common, and so what gives us pleasure and pain is not something that differs from person to person, but is common to us all: being ostracised, punched, or humiliated would cause anyone pain; whereas friendship, health, or praise causes us to feel pleasure. So what we see as virtuous doesn’t depend on feelings that only I have, but on feelings we all have because we’re human. Secondly, he sees human nature as endowed with a healthy dose of sympathy, and this means that it is not only things that cause me pleasure or pain directly that I call virtues, but also the things that would cause me pleasure or pain if I were in someone else’s shoes. In effect sympathy in Hume’s moral theory functions as a twist on the Golden Rule: do unto others as you would have them do unto you because you experience the same pleasure and pain they feel. Sympathy takes us beyond thinking about our own pleasure and pain when we are trying to make moral decisions, and causes us to feel, and so take into account, the pleasure and pain others will feel if we act in certain ways.

Isabel likes Hume (in fact she likes Scottish philosophy on the whole), and she has a lot of time for the idea of sympathy, or as she calls it at times, moral imagination. When Cat states that emotions are merely instincts that function to promote self-preservation, we hear echoes of Hume in Isabel’s counter-argument that they may be essential to our moral growth because they help us to understand the suffering of others (p.49). A bit later, when she is trying to work out why she dislikes Toby so much, she wonders if it is because he lacks a moral imagination. This, she thinks, would explain his bad treatment of Cat: “Morality depended on understanding the feelings of others. If one had no moral imagination – and there were such people – one simply would not be able to empathise with them. The pain, the suffering, the unhappiness of others would not seem real, because it would not be perceived” (p.123). So, could a Christian be a sentimentalist like Hume? I don’t think there’s anything inherently unchristian about thinking make moral judgments on the basis of a moral sense, but I do think you’d have to add a couple of planks. I don’t think anyone, Christian or not, would now accept the blanket assumption that we all share much the same moral sense. While most people agree most of the time about what is virtuous or vicious, our generation – more perhaps than any other has been – is very aware that people also have deep moral disagreements with each other. This would have to be explained, which you could do at one level perhaps by something like genetic variation and/or difference in upbringing, though you would then have the problem of whose moral feelings are the right ones. A Christian is in a better position than a non-Christian here, because they would be able to point to God’s revelation to provide an objective standard, and see the variation as evidence of human fallenness. Another deficiency in Hume’s theory for the Christian is that it doesn’t include any obligation or accountability to God for how we live, so this too would have to be added.
Posted by Nicole at 07:00