The end of our journey through Pilgrim's Progress 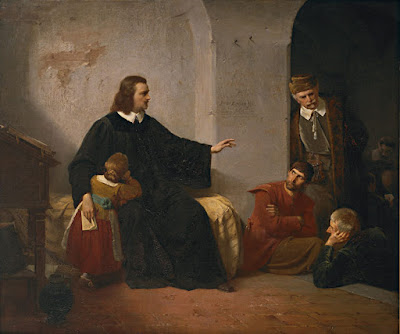 If you ever visit the Australian National Gallery of Victoria at Federation Square in Melbourne, look for the painting Bunyan in Prison by George Follingsby. It's not always on display, but I know I'll be hunting for it next time I'm there. It's ironic that one of the most compelling pictures of the great English preacher John Bunyan is here in Melbourne, Australia, near the Yarra River and behind the crazy-crackled modern facade of Federation Square: but there it is!

This beautiful painting sums up so much of what we've learned about John Bunyan. Preacher and pastor, Bible in hand, his visitors hang off his words; a devoted father, his arm is around his beloved blind daughter Mary, craning her neck to hear his words; a man familiar with suffering, he was imprisoned in this small dingy room for 12 long years, where he wrote Pilgrim's Progress, about another pilgrim's suffering during his life journey.

I don't know about you, but I've learned an immense amount from Pilgrim's Progress. I've been struck by the depth of Puritan contrition for sin, and challenged to think through my own views on conversion and assurance. I've learned to see my life as a pilgrimage through an ever-changing landscape to a glorious city. I've been equipped for my daily battle against sin, the world, and Satan. I've been inspired by the women I've read about, to be a woman of tenderness and strength. I've been reminded to care better for troubled Christians. I've been encouraged not only to live well, but to die well.

And so we come to the end of Christian and Christiana's pilgrimage, and our own journey through Pilgrim's Progress too. I hope you've enjoyed reading this incredible book with me. My prayer for each of you is that you, too, may persevere in your pilgrimage, overcome every difficulty, fight every battle, face every danger, and win through the River of Death to the Celestial City. May we be valiant pilgrims, one and all.

Who would true valour see,
Let him come hither;
One here will constant be,
Come wind, come weather
There’s no discouragement
Shall make him once relent
His first avowed intent
To be a pilgrim.

Whoso beset him round
With dismal stories
Do but themselves confound;
His strength the more is.
No lion can him fright,
He’ll with a giant fight,
He will have a right
To be a pilgrim.

Hobgoblin nor foul fiend
Can daunt his spirit,
He knows he at the end
Shall life inherit.
Then fancies fly away,
He’ll fear not what men say,
He’ll labour night and day
To be a pilgrim.

Thank you Jean, for this wonderful series!!

Hi Jean, like Nicole, I just wanted (belatedly) to say how much I appreciated this series. Interesting and inspiring!