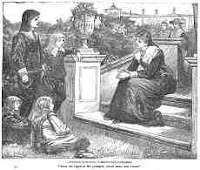 Next Monday, Jean Williams will start to walk us through November's book, Pilgrim's Progress. One thing I'm planning to do this month is to read through a children's version with my kids. Jean has kindly provided us with her preferred versions in this post...

Pilgrim's Progress has always been a great favourite with children. What child wouldn't love an adventure story about a valiant pilgrim-warrior who escapes the City of Destruction and travels to a Golden City, along a treacherous path which runs up stony mountains, into dark flame-filled valleys, and through enchanted lands which lull the unwary traveller to sleep, all the while battling fierce monsters, escaping fearsome giants, and resisting the temptations of a dazzling year-long fair?

Our hope, of course, as we read Pilgrim's Progress with our children, is not just to entertain them, but also to turn them into pilgrims themselves: brave travellers who will cast their burdens of sin and guilt at the foot of the cross, turn their faces away from the world and towards heaven, weather times of difficulty and discouragement with courage, fight their battles valiantly, and travel with perseverance until they receive their own hero's welcome into heaven.

Children's versions of Pilgrim's Progress, however, are a mixed lot. Even the best take liberties: shifting events around, skipping over parts deemed unsuitable for children, and imposing odd interpretations on the text. You won't find a Giant Pope amongst them (too politically incorrect in these ecumenical days) and most tone down the vivid descriptions of Hell.

In some ways, you're better off waiting until your child is old enough (which may vary from 5 to 10, depending on the child) to listen to the original version. But if you're keen to read Pilgrim's Progress to a child who's not ready for the original - and I encourage you to, my 5-year old's favourite book is Pilgrim's Progress! - here are my suggestions. 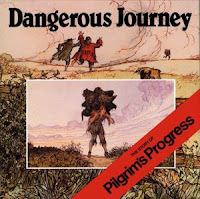 My son Thomas fell in love with Oliver Hunkin's Dangerous Journey when he was 4 - "Read me Chwistian, Mummy!". I love the fact that this book draws on the original words of John Bunyan (although you'll need to do some explaining), and it's fairly true to the story, not skipping over "unsuitable" bits like the Mouth of Hell. It's a delight to read, on thick, glossy paper, with glorious illustrations by Alan Parry. My only quibble is that you wouldn't want to read it to a sensitive child with a vivid imagination, as some of the pictures are pretty gruesome: I wouldn't have read it to my older 2 children when they were young, but an adventure-loving child will adore it.

Helen L. Taylor's Little Pilgrim's Progress is a chapter-book version of Pilgrim's Progress which includes both the stories of Christian (Part 1) and Christiana (Part 2). Most of the characters have become children of about 10-12. It's simple enough for an early reader, and begs to be read aloud: just ask my 7-year old and my friend's 4-year old. This is a gentle version with a slightly old-fashioned style: the "little pilgrim" longs for the sweet face of his mother and is watched over by a guardian angel. Apollyon becomes a fierce man called "Self", and Hell becomes the "Country of the Wicked Prince", but the book talks openly about Faithful's martyr's death, Giant Despair's temptations to suicide, and the fate of lost pilgrims. The ink drawings are good, if not outstanding. Recommended for reading aloud to a child who doesn't mind "more words than pictures", or for primary aged children to read to themselves. 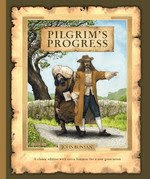 John Bunyan's Pilgrim's Progress and Pilgrim's Progress 2: Christiana's Story (Christian Focus Publications) are original language editions with the spelling modernised. My husband and 7-year old son enjoyed reading the first volume together. These would be my first choice for exposing children to the original, because they're easy and pleasurable to read, 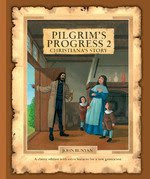 with a clear, attractive typeface on good-quality paper, and exceptional 19th century illustrations. They include Bunyan's Bible references (but unfortunately not his marginal notes), explanations of unusual phrases, a dictionary, short discussions for further study, and a brief life of John Bunyan. Perfect for reading aloud to a family, or for giving to an older child to read or study. 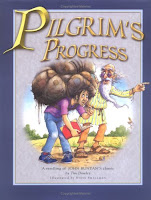 Tim Dowley's Pilgrim's Progress is another popular picture-book version of Pilgrim's Progress, ideal for reading to a pre-schooler who might be a little scared by Dangerous Journey. The cartoon-style illustrations may not be to everyone's taste, but they are well-drawn and not too scary. It's re-told in a modern, informal style, and divided into short, easy sections.

Jean Watson's The Family Pilgrim's Progress is very faithful to the original, with 10 reasonably short chapters. I found the story-telling less absorbing and compelling than many of the other versions, although I liked the boxes with descriptions of the main characters and relevant Bible passages. The black-and-white illustrations are excellent, but the paintings are over-coloured and haven't reproduced well.

Geraldine McCaughrean's A Pilgrim's Progress, which won the Blue Peter Book Award, is by a talented children's author well-known for her dramatic re-tellings of famous stories. The exquisite pencil illustrations are by an equally talented illustrator, Jason Cockcroft. McCaughrean is not writing from a Christian perspective (in an interview she describes Pilgrim's Progress as wonderful but bigoted) so it probably won't be your first choice: the cross is put later in the story, the gospel is defined as "Good can and will prevail over Bad" (p.26), and the Door in the Hill leads to "a tunnel falling away into Nothingness" rather than Hell (p.104). 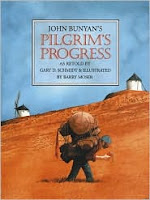 Gary Schidt's Pilgrim's Progress is exquisitely written, illustrated and produced, in a large picture-book format suitable for adults or older children. There are some noticeable influences: I'm sure I detected the flavour of C.S.Lewis ("I am Despair, and I am lost." "Is there no hope for him?" "One." p.15 - a helpful theological departure from the original?), Julian of Norwich ("All shall be well. And all manner of things shall be well." p.12), and a particularly un-Puritan liturgical flavour ("Peace be with you. And with you." p.18). While it may not be the one you choose for your family, this book is an absolute pleasure to read.

Teaching Pilgrim's Progress to your children

I don't have a lot to say here, except that I was blown away by one homeschooler's attempt to teach Pilgrim's Progress to her children: look at the glorious map of little Christian's journey her daughter came up with. This would be a brilliant exercise to do with children.

I was interested to see your post because I had the opportunity to shoot a dramatic film of Pilgrim's Progress. It was the first feature film in which Liam Neeson had a staring role. The film was shot in England and Ireland, and it was many years ago.

I can really recommend Helen Taylor's "Little Pilgrim's Progress". I read it when I was about ten and it had a hugely positive impact on my faith.

I agree with Rachael about Helen Taylor's version. I'm reading it with Jacob at the moment and we're both loving it.

How old's Jacob again, Nic? He's school-age, isn't he? My 5-year old couldn't cope with this version - he always says "too many words, not enough pictures" when I try to read him even picture-books which feel too wordy - but he loved the picture-book one. My 7-year old, on the other hand, loves the version your kids are enjoying.

Have you had a chance to compare it to the original (are you reading an original) Nic (or others)? What do you think - has she done a good job translating it into a children's book?